What You Don't Know About Your Car Insurance Could Kill You:

The modern unibody auto is a marvel of fuel efficiency and safety. But the very techniques designed for maximum protection for occupants and gas mileage have resulted in a precise structure that cannot be restored to the same degree of safety following a major collision using the standard frame-straightening and other techniques found in the collision repair industry. There are no standards regulating this well-kept secret of the insurance industry. That practice puts millions of Americans at risk in any subsequent crash.

OnStar Kidnaps Data: Says YOUR Info Does NOT Belong To YOU

Chevy's OnStar system has told a Santa Barbara, California man that he can't have his own data.

Following a major collision that totaled his car, the car owner -- and OnStar customer -- contacted OnStar to obtain the accident data. 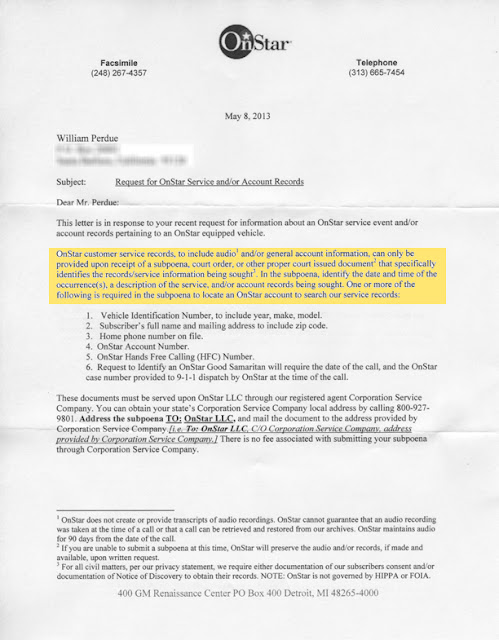 WHOSE DATA IS IT?

Instead of cooperating with its own customer, OnStar -- while admitting it had data on the accident -- essentially told Perdue to take a hike and come back with a court subpoena.

Perdue owned the vehicle, paid for it and everything in --  it including his data. But OnStar refused to give Perdue his own data even after he sent a request in writing.

ONSTAR: GET LOST! ALL YOUR DATA ARE BELONG TO US!

The situation began  April 16, 2013 when a distracted California Highway Patrolman drove his Crown Vic cruiser at an estimated 40 miles per hour into the rear of Perdue's Chevy Sonic while it was stopped at a traffic light in Goleta.  The Sonic was totaled.

Despite a major collision between the subcompact Sonic and the massive Crown Vic, neither Perdue nor his passenger were injured. But the Sonic gave up its mechanical life: its frame was bent and the crumple zones well crumpled.

Perdue said he was grateful when the OnStar emergency operator contacted him seconds after the collision. While no airbags deployed, the Sonic has accelerometers and other instrumentation that are monitored and both sent to OnStar and stored in the car's Event Data recorder.

The data kidnapping extends to the even more detailed data stored in Event Data Recorders (EDR) -- the  black boxes similar to those required for commercial aircraft that come with most new vehicles.

General Motors began rolling out EDRs in the 1990s.

This .pdf shows shows widespread the adoption has become across most car companies.

Perdue asked for his data by phone and in writing. OnStar said no. The data is Perdue's. OnStar has illegally refused to return his property.

Chevy's OnStar system has grown notorious for reserving the right to use customer data in all manner of promiscuous ways, passing it along to others and using it in ways their customers never imagined. Their Terms of Service have been assailed by privacy activists.

OnStar was even forced to cancel a plan to sell the information to outside companies after a public outcry.

OnStar's previous privacy violations prompted a senatorial call for FTC hearings. This example is a brazen attempt by a corporate giant to steal a customer's own data for its own use.

Interstate theft of data from millions of Americans should be investigated by the Justice Department.

WHY IS THE DATA STILL IMPORTANT?

The CHP admitted all responsibility. Allstate totaled out Perdue's Sonic. He has a new car.

So why is the data still significant?

First of all, it's his data that's illegally still being held hostage. Other people in his position may find things did not go as well, and need to obtain the data. Only to find that OnStar's data-nappers refuse to release what belongs to them.

Second, event though Perdue and his passenger were given a clean bill of health at a hospital following the accident, the OnStar and EDR data would record G forces and other factors that might be relevant in any subsequent medical issues that might develop.

Third, the G forces and other data captured by the Sonic's EDR sensors could be compared to crash data collected by NHSTA and private accident reconstruction companies to better determine the level of damage done to the frame and other elements of the vehicle. That data could contribute to the overall understanding of the crashworthiness of vehicles which have been repaired after major collisions.

Lewis Perdue is a former prize-winning Washington, D.C. journalist with more than 40 years experience in investigative reporting. He is a New York Times bestselling author with 22 published books (so far) to his name. Those works include non-fiction investigative reporting, technical, business and health books. He also writes intensely researched, fact-based fiction, some of which have been investigative thrillers that have exposed actual government and corporate malfesance.

As a correspondent and columnist in Washington D.C. he has reported for Dow-Jones, Gannett and other major media outlets such as the Boston Globe and the Washington Post.

Lew has covered the White House, Congress, Supreme Court, and has broken a long string of major investigative stories including the Koreagate scandal, and the Congressional gambling scandal. He won a lawsuit against the Watergate Special Prosecution Force that ultimately got him access to documents for his reportage on the Operation Townhouse Campaign Slush Fund Scandal. All of those articles covered front-page headlines across the United States.

He learned the well-kept secrets of the car insurance's deadly underbelly when a distracted California Highway Patrol cruiser rear-ended -- and totaled -- a very close family member's car. The journey into this dark underbelly has turned up corporate misbehavior, deception and a concerted effort to suppress information and practices that put millions of lives in danger.